Here is a classic view of the sun setting over Rockport harbor, as seen from the Headlands. This postcard was postmarked on Aug. 19, 1912, but the picture has to be earlier than that because of what it shows.

Note the smokestack in the center left of the picture. That is from the old Annisquam Cotton Mill, which once filled the area along Broadway between School Street and Main Street. It was destroyed by fire in 1882, but the ruins remained there for another 22 years, until they were finally removed in 1904.

Given that the smokestack was removed in 1904, the picture is from then or earlier.

A shoe repair sign is prominent on the right side of this circa 1928 view of Dock Square in Rockport. It is difficult to make out here, but on the road out to Bearskin Neck, near the center of the image, is a banner strung between two light poles displaying the word “Lobsters.”

There is a pole with a sign in the center of the square where today there is an island. In this view from just a couple years later, that pole appears to be gone. In this much earlier view, there was a large tree at that point, just as there is today.

Compare this picture to these two other postcards showing Dock Square:

This postcard was published by the Rockport Photo Bureau. It is not dated. Judging by the appearance of the reverse side and by the cars visible in the picture, I estimate it to be from around 1928.

On the site where formerly stood this inn, the town of Rockport is now building a park. This should be welcome news to Rockporters and visitors alike, because the views from here are spectacular.

The building was originally constructed around the turn of the century as a private mansion. For many years, it operated as the Cape Hedge Inn. It later became The Beaches inn and then The Sandpiper. It was still operating as The Sandpiper when it burned down in the late 1970s. (A recent Gloucester Daily Times article said it burned down in 1978 but a 1984 court decision involving the property said it was 1976 or 1977.)

Over the years, various attempts were made to rebuild on the property. In 1978, The Sandpiper’s owner, John Krenn, obtained a zoning variance to construct a two-story, 2o-room inn, but the variance lapsed when construction did not begin. In the 1980s, a subsequent owner was granted a variance to build a four-unit condominium on the site. A court later revoked the variance, ruling that the town should not have granted it.

For other postcards of this inn, see:

This postcard was published by the Rockport Photo Bureau. There is no date on the reverse side. Based on the similarity of the printing on the reverse side to other cards I have, and judging by what can be seen of the cars in the picture, I estimate this to be around 1939.

Note the misspelling of Marmion Way as Marmian Way in this postcard’s caption. Even so, this is a wonderful old view, made better by the three children posing in the middle of the road.

All of the houses you see here are still standing today, as is the stone wall on the left. At the end of that wall, just about where the children are standing, is the entrance today to the Old Garden Path. I have another postcard that shows two of the same houses pictured above, but from the vantage point of the Old Garden Path.

I have another postcard from around the same time showing the view looking in the opposite direction, taken just on the other side of the house on the left above. You can see the same house in that other postcard.

The house on the left was known in the 1960s and 1970s as the Hammock House. Its owner, Paul Dow, began making hammocks in his retirement for family and friends. As demand grew for his hammocks, he started selling them from his home.

This postcard does not identify a publisher. It was postmarked in 1911. 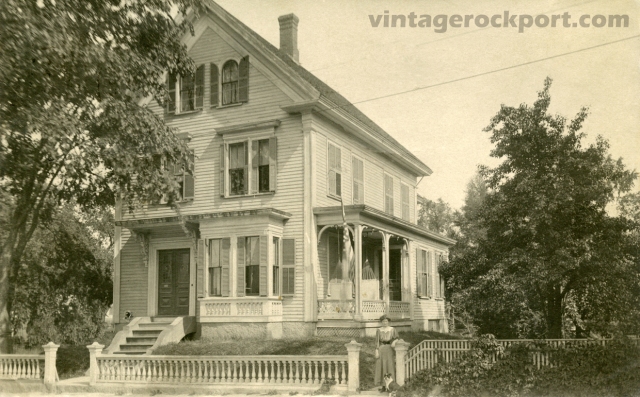 This is a real-photo postcard showing a house with a woman and her dog standing at the gate. The house is not identified anywhere on the postcard. However, I have identified it as the house that still stands at 11 Broadway Avenue in Rockport. The card was mailed in 1911. There is a long note on the reverse side but it is illegible.

The same house as it looks today.

An 1884 street atlas of Rockport identifies this property as then belonging to “Levi Gott Heirs.” As far as I can determine, there was only one Levi Gott who ever lived in Rockport in the 1800s. He was a descendant of Samuel Gott, one of Rockport’s first settlers. He married Martha Tarr, a descendant of Richard Tarr, Rockport’s first settler. Levi died in 1876, which would comport with the 1884 atlas listing referring to his heirs.

Interestingly, the fathers of both Levi and Martha — John Gott and Jabez Tarr — fought at the battle of Bunker Hill.

A later 1899 atlas does not identify the owner of this property, but it shows the house next door as belonging to “J.S. Gott.” It may be, then, that Levi left this property and the one next to it to his children — or at least to John. 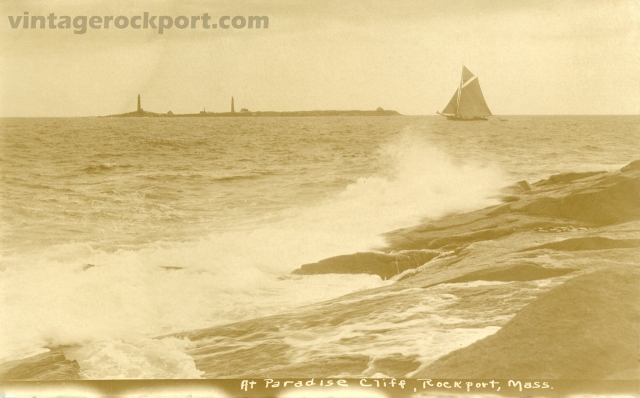 This real-photo postcard shows the view from Paradise Cliff along Eden Road in Rockport. In the distance is Thacher Island and its twin lighthouses, while a schooner passes between the island and the shore.

As I explained in an earlier post, this area off Flat Rock along Eden Road was developed as a community of cottages just after the turn of the century. The developer, J.F. Reynolds, himself lived in a house at 34 Eden Road, right at the corner where Eden Road turns sharply westward after following the coastline in a northerly direction. END_OF_DOCUMENT_TOKEN_TO_BE_REPLACED

This image of Mill Pond looks from the pond’s east side across to the west side and to houses on King Street. The dam is to the right. All of the houses you see here are still standing. The house in the background with the cupola on the roof is today the Linden Tree Inn.

The same scene today. The mansard roof house now has a deck and a small white cottage now obscures the view of the house next to it.

Mill Pond was built in 1702 by John Pool, the second settler of Sandy Bay. In 1701, he acquired the rights to build a grist mill here. To power the mill, he constructed a dam across the stream, which was then called Davison’s Run and is now called Mill Brook. Most accounts say he also built a saw mill there, from which he supplied lumber used to build Long Wharf in Boston in 1710. END_OF_DOCUMENT_TOKEN_TO_BE_REPLACED

An 1873 view of the house, before the dormers were added.

Samuel Gott, a weaver, was the first resident of the area of Pigeon Cove known today as Halibut Point. The postcard identifies his house as having been built in 1701, but most sources put it at a year later, 1702. A Massachusetts Historical Commission report says it could have been anytime between 1702 and 1730.

Whatever the exact date, there is no dispute that it was one of the earliest houses in Pigeon Cove and Sandy Bay. It still stands today and, although it directly borders Halibut Point State Park, it remains privately owned. END_OF_DOCUMENT_TOKEN_TO_BE_REPLACED

Then and Now: The Columbia and The Adventure

Posted on September 6, 2015 by Robert Ambrogi 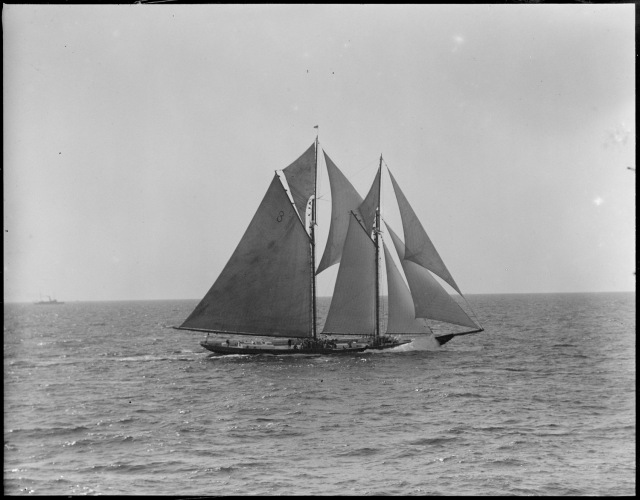 The original Columbia off Gloucester in 1926.

The Adventure racing off Gloucester in 1926.

The new Columbia off Gloucester today. 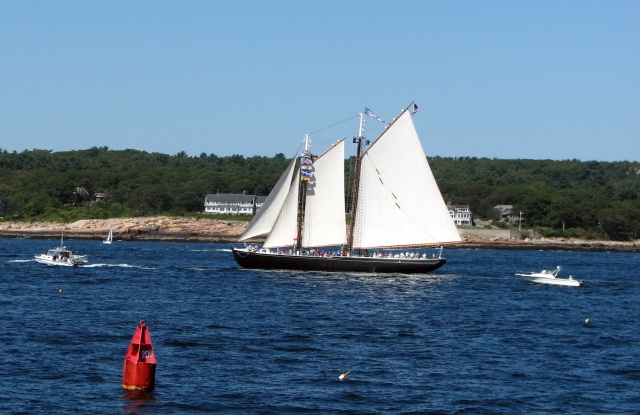 The Columbia and The Adventure preparing to race today off Gloucester.

In 1926, The Columbia and The Adventure competed in the Gloucester schooner race. Today, they competed again. It was an historic match-up in that both boats were more or less resurrected this year. END_OF_DOCUMENT_TOKEN_TO_BE_REPLACED 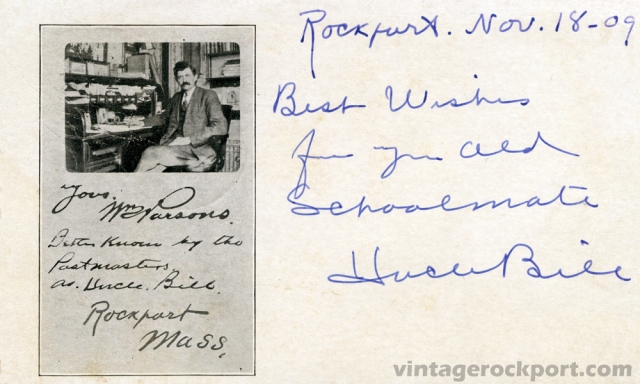 Here is a highly unusual postcard that was both printed for and sent by William E. Parsons, long known around Rockport as “Uncle Bill” or “Uncle Billy.” Parsons was postmaster of Rockport between 1898 and 1914 and also gained acclaim as half the theatrical team of Parsons & Pool, who traveled widely in the late 1800s putting on performances of Uncle Tom’s Cabin. END_OF_DOCUMENT_TOKEN_TO_BE_REPLACED