Dave Matthews is a marketing, mergers and acquisitions consultant in Stowe, Vt., who has seen five generations of his family spend a portion of their summers on Long Beach, which straddles the Rockport/Gloucester line. Dave generously sent along these photos to share with readers of Vintage Rockport. 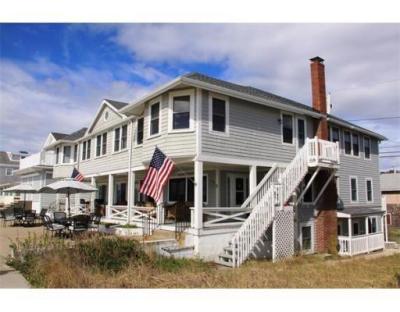 A contemporary view of the Chicataubut Inn

Dave’s grandfather Charles Matthews was one of Vermont’s first two automobile dealers, starting in 1905. In 1920, he and his wife Eleanor, along with their 10-year-old daughter Jean and 8-year-old son Bill (Dave’s father), drove from Vermont to visit Long Beach for the first time. They stayed at the Chicataubut Inn at the center of Long Beach.

The family did not return again until the late 1930s. By then, Charles had died, but Dave’s father and mother, Bill and Kay, started a run of annual visits that lasted some 30 years. “They established a close friendship with the owners, Cyril and Florence Ellis, two Watertown teachers who had a great summer hospitality business and probably were the longest tenured owners of the Chicataubut,” Dave writes. Just as Dave’s father brought him as a kid, he brought his kids, and his kids have brought Dave’s grandchildren.

The top three photos are all from that first visit in 1920. At top, in front of the Long Beach sign (probably the one you see in this image), the man with two children is Charles Matthews with his daughter Jean and son Bill. The second photo shows Charles’ wife Eleanor. In the third photo, Bill and Jean sit with other children on the porch.

The final photo is from 1936 and shows the Chicataubut Inn above the beach. Real estate listings for the building say that it was constructed in 1900. Supposedly, Chicataubut is an Indian word that means warm or happy home.

A huge thanks to Dave for sharing these fantastic photos.

This entry was posted in Uncategorized and tagged Hotels, Long Beach. Bookmark the permalink.