This view shows Main Street in Rockport around 1907. The card was postmarked in Gloucester on July 23, 1907. It is a divided-back postcard, a type of postcard that was first produced in 1907. 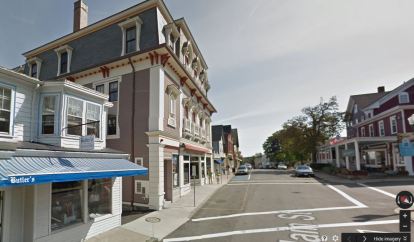 To the right is a screen capture from Google Streetview showing the same scene today. The larger building to the left, originally built in the 1860s as the Haskins Building, appears to be the same today. In fact, however, it has been replaced by the all-new Shalin Liu Performance Center, completed in 2010 and designed to resemble the former building as closely as possible.

The building in the foreground to the left, which now houses Butler’s Haberdashery, was then the location of Smith’s Hardware, I believe. The building across the street, to the right of the picture, housed the Post Office and the Granite Shore Hotel. Note the trolley tracks running along the road.

For other views of Main St., see the posts here.

This postcard was printed by The Robbins Bros. Co, Boston, and distributed through the Metropolitan News Company, a larger Boston postcard publisher. Robbins was in business from 1907 to 1912.

This entry was posted in Uncategorized and tagged Main Street. Bookmark the permalink.