Yet again, a sharp-eyed reader has helped me identify the present-day location of a scene shown in a vintage postcard. I recently posted a circa 1918 postcard showing the Oak Knoll, a summer boarding house in Pigeon Cove. In that post, I said that the best I could determine about its location was on the east side of Granite Street, between Phillips Avenue and Haven Avenue. 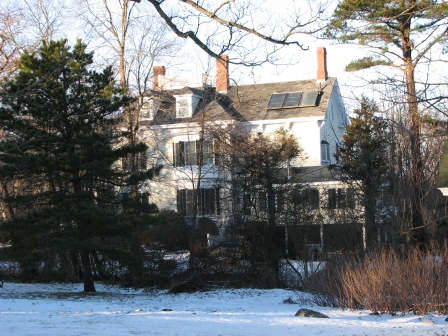 A comment to that post said that the Oak Knoll appeared reminiscent of a house on Phillips Avenue, across from the Nickerson residence. Sure enough, the house at 102 Phillips Avenue appears to be the exact building shown in the postcard, as these two photographs show.

The first picture, taken from Ocean Avenue, is roughly from the same perspective as the postcard. The chimneys, dormers, windows and bowed front are all identical. Even the widow’s walk remains in the same location on the roof.

This second photograph is taken from Phillips Avenue. Again, you can see that the house has all the same features as did the Oak Knoll.

According to Zillow, this house was built in 1874 and has six bedrooms. That information, too, comports with the conclusion that this is, in fact, the former Oak Knoll.

This entry was posted in Uncategorized and tagged Hotels, Pigeon Cove. Bookmark the permalink.