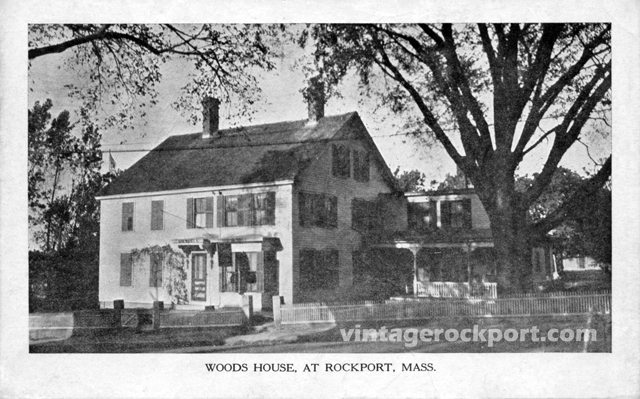 The Woods House still stands at the corner of Mt. Pleasant St. and Norwood Ave. (see picture below). At the time this picture was taken, the house was a summer boarding house. A 1912 classified ad in the Boston Evening Transcript described it this way:

The greater historical significance of the house is that it was once the home of Henri N. Woods, a prominent lawyer and civic leader in Rockport in the latter half of the 19th century.

The Woods House as it looks today.

Woods was the defense lawyer in a notorious 1877 Rockport murder case involving two traveling salesmen. The two men, Albert Joy and Charles H. Gilman, arrived in Rockport on April 11, 1877, on the 9 a.m. train from Beverly. While Gilman called on several houses, selling an attachment to sewing machines, Joy hung around the railroad station. Around noon, the two men were seen passing through the station and out its western end, heading toward a nearby reservoir. A half hour later, Joy was seen returning, alone. He walked up Pooles Lane to Main Street, then to Broadway and into town, where he stopped at a restaurant and ordered oyster stew and tea. He then returned to the station and boarded the train that was set to leave at 1:30. As he waited for it to depart, voices suddenly started screaming, “A dead man has been found in the reservoir.” Upon hearing that news, Joy exclaimed, “My God! It is my chum.”

Police quickly arrested Joy, who professed his innocence, saying he left Gilman at the reservoir while he went to get food. With Henri Woods as his defense attorney, Joy was put on trial in Salem on July 9, 1877, for the murder of Gilman. After a four-day trial, the jury returned a verdict a guilty. He was sentenced to be hanged, but four days before the scheduled hanging, the governor issued a reprieve. A few weeks later, the governor commuted his sentence to life in prison.

Woods was also instrumental in helping to establish the first public library in Rockport in 1871 and served on the first library committee. Also in 1871, he served as Town Meeting moderator. In 1875, he was an incorporator of the Rockport Water Company, formed “for the purpose of supplying the town of Rockport with pure water for the extinguishment of fires, domestic and other purposes.” The company was granted a license by the state legislature to take water from Cape Pond.

In 1894, Woods was appointed to serve as a special justice of the Gloucester District Court.

There was a fishing schooner by the name of Henri N. Woods that was built in 1882 in Boothbay, Maine. I cannot find whether it was named for this same Henri Woods, but it was registered as part of the Gloucester fleet and was owned by George Norwood & Son, which owned several Gloucester-based schooners.

As for this postcard, it may have come from the proprietor of the guest house, as it informs someone in Somerville, “I have been unable to locate a room for you. Trusting that we will have better luck another year.” The sender’s name appears to be Annie C. Parr. The card was mailed on July 5, 1927. This same photograph is included in the 1924 book, Rockport: A Town of the Sea. So I would estimate the picture to be from between 1920 and 1923.

This entry was posted in Uncategorized and tagged Hotels. Bookmark the permalink.