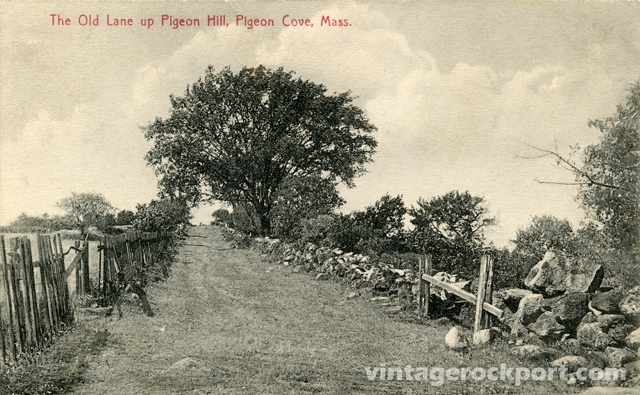 An earlier post here featured the view from the top of Pigeon Hill. Once described as a view “excelled nowhere on the New England coast,” it can no longer be seen, now obstructed by trees. This postcard shows the road one would take to reach that view, Landmark Lane. The road still exists, but it is now paved and dotted by houses and driveways.

The photographer, Charles H. Cleaves, owner of Rockport Photo Bureau, lived not far from Landmark Lane, on Pasture Road, and took many photographs of the area. This postcard has no date. However, it was printed in Germany, which indicates it was produced sometime prior to 1917. That was the year the U.S. entered World War I and declared war on Germany, putting an end to U.S. publishers’ use of printers there.

2 Responses to The Old Lane up Pigeon Hill, Pigeon Cove, Mass., circa 1915