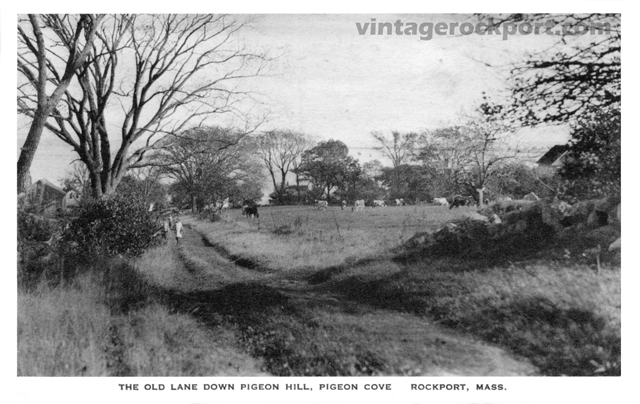 What goes up must come down. Yesterday’s post featured the old lane up Pigeon Hill. Here is the same lane, looking down the hill. If you look carefully, you can see the ocean and, to the right, the Rockport coast. Walking up the road are three children, a girl and two boys. In the field at the center of the picture, cows are grazing.

This photo, like yesterday’s, is by Charles Cleaves of Rockport Photo Bureau. Whereas I estimated yesterday’s picture to be around 1915, I put this a few years later — around 1925. I base that on the back of the card and its similarity to other cards I have that are dated around the mid-1920s.

Could the girl in this picture be Cleaves’ daughter Virginia? As I’ve mentioned in other posts, Cleaves’ postcard business was later taken over by Virginia. Virginia was born in 1912. If this picture was 1925, she would have been 13. The girl looks to be around that age.