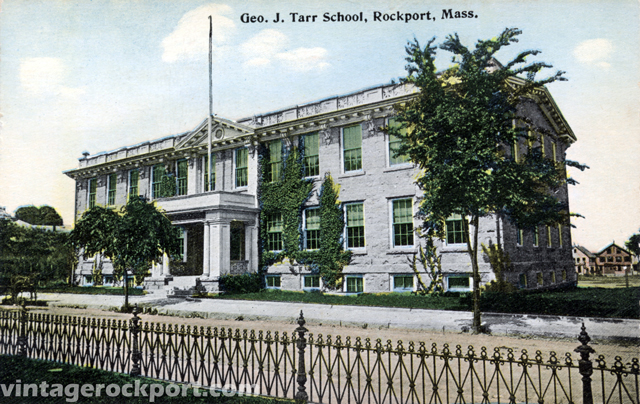 In 1882, fire swept through the Annisquam Cotton Mill, which had operated since 1847 on a site bordered by Main Street and Broadway in Rockport. Remarkably, although the fire destroyed the mill, the ruins remained standing there for another 22 years, until, in 1904, they were finally removed. 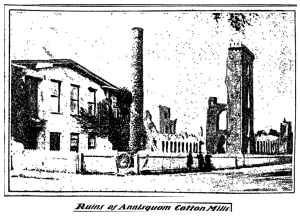 Ruins of the Annisquam Cotton Mill.

The fire spared one mill building, the machine shop, built in 1864. In 1904, the then-owner of the former machine shop, George J. Tarr, deeded the property to the town of Rockport. As the Boston Daily Globe reported on Nov. 28, 1904:

[The building]is to be converted into a modern school building, with tasteful exterior and interior arrangements, so planned as to yield the best results both as to convenience and sanitation. It will be called the George J. Farr (sic) school, in honor of the public-spirited citizen whose generosity has made it possible.

Architect's rendering of the new school.

Along with the building, Tarr also donated to the town the remainder of the land on which the mill stood, which consisted of “several acres, bounded by three streets, and facing down the harbor, … to be used for park or other purposes at the discretion of and for the benefit of the town.”

Today, this former machine shop and former school building has a new use, as the town’s library. In this postcard, to the right of the building, you can see how the property reached down to the harbor, clear from the school to Main St.

Two buildings from the former mill housing also still stand on Broadway, just up the street from T-Wharf, where they are now condominiums.

This card has no date and lists no publisher. I am guess-timating that it is from around 1910.

This entry was posted in Uncategorized and tagged George J. Tarr School. Bookmark the permalink.