Here is a beautiful, colorized 1905 view of Long Beach, looking much the same as it does today, except for the Victorian-era attire on the people strolling along the beach. One other difference is that the concrete retaining wall that now separates the cottages from the beach had not yet been built at the time of this photo. Instead, it appears that a slight dune is all that stands between the cottages and the shore. 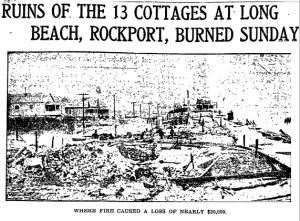 Just two years after this photo was taken, a fire swept through the cottages at Long Beach, destroying 13 of the 56 cottages. According to the Boston Daily Globe, the Nov. 18, 1907, fire was suspected to have started by a stray spark left in a cottage that had been closed up for the season.

The Globe story illustrates the antiquated state of fire fighting at the turn of the century:

It was impossible to fight the fire other than by a bucket brigade, with water from the wells near there. A telephone message was also sent to Chief Crowe of Gloucester, and he sent down a carload of men on the Long Beach line with axes and hand extinguishers.

By this time, the fire had leisurely eaten up 12 cottages, and had reached Sea Breeze cottage, on the eastern end, … when the force of men with buckets and wet blankets, axes, etc, were sufficient to stay it.

In case you missed that, let me restate it: Firefighters from Gloucester came to the scene by taking a trolley. Imagine if firefighters today responded to alarms via public transportation.

This postcard shows a 1905 copyright on the front and bears a Oct. 19, 1905, postmark on the reverse. It was published by The Rotograph Co. of New York City.

This entry was posted in Uncategorized and tagged Long Beach, The Rotograph Co.. Bookmark the permalink.