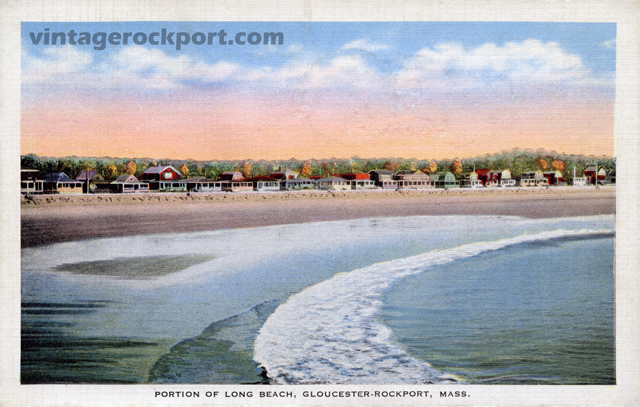 This late-1930s postcard shows a colorized view of Long Beach, which straddles the Rockport-Gloucester line. Except for the cottages, Long Beach has barely changed from early descriptions of it. Consider this description from the 1873 book, Pigeon Cove and Vicinity, by Henry C. Leonard:

Between Cape Hedge and Brier Neck, the half mile of Long Beach is of sand, and wide and smooth; but behind the sand, hardened by the tramping waves, are sand-knolls thrown up by the winds. Long Beach is backed by a marsh. On rising ground behind the marsh, and spreading over hundreds of acres receding to Cape Pond and Beaver Dam, is a grand wood but slightly damaged by the ruthless axe.

I do not know when the first cottages were built at Long Beach. The earliest reference I could find to them was from 1895, when the Long Beach Association made a request to the Rockport Board of Water Commissioners that the town furnish the cottages with water service. “It appears from investigation made by the Board, it would be a good paying investment for the town to put the water to Long Beach, and no doubt the revenue would increase each year as new houses are built,” the board reported.

This is a linen postcard, a type of postcard published on linen-like paper that was popular from around 1930 to 1945. The publisher of this postcard, E.C. McIntire of Gloucester, went out of business in 1937. The postcard has a postmark of July 2, 1941. Those factors suggest the image was from around 1936 or earlier.

This entry was posted in Uncategorized and tagged Long Beach. Bookmark the permalink.

5 Responses to Portion of Long Beach, Gloucester-Rockport, Mass., circa 1936