An Update on Leander Haskins and the Old Hospital 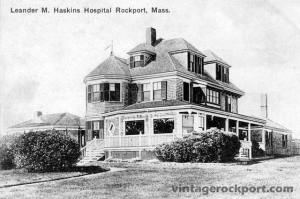 In an earlier post here, I published a postcard showing the Leander M. Haskins Hospital, atop what is now known as Hospital Hill, in 1907. I wrote a little bit there about the man for whom the hospital was named, noting that he was active in town affairs. What I did not realize then was that the hospital was formerly his home. He died in 1905 and by his will left his house and some 70 acres of land to be used for a hospital and park.

All of this is explained in a brief biography of him published in The New England Historical and Genealogical Register, Volume 60 (1906):

Leander Miller Haskins, of Rockport, Massachusetts, who died in that town, August 1, 1905, aged sixty-three, was a life member of this Society from 1889. He was a native of Rockport, born June 20, 1842, was fitted for college at Phillips Andover Academy, and was graduated at Dartmouth College in 1862. He then taught school in his native town, and afterwards employed himself in civil engineering. In 1853, during the Civil War, he was appointed clerk in the commissary department of the army, and was attached to the Nineteenth Army Corps. He became later a clerk in the Navy Department.

After the war, he engaged in the fish and commission business on Long Wharf, Boston, and in this business he was engaged at the time of his death. He was one of the pioneers in the fish isinglass business. He served as a representative in the legislature for one year. He was a director in the Faneuil Hall National Bank of Boston, and in the Rockport National Bank, and other corporations; and was a member of the Boston Art Club, and many other organizations. He was also interested in yachting. He was married, his wife dying some years before him, and he is survived by an adopted daughter, Louise Canfield, of Montclair, New Jersey.

By his will, Mr. Haskins named his adopted daughter as residuary legatee, and provided that there shall be established first a trust fund of $65,000, to continue fifteen years after the execution of the will. After enumerating how the income shall be distributed among relatives and friends, direction was given that the income of one thousand dollars be given to the First Congregational Church of Rockport for general purposes, and the income of another thousand to the public library in that place, for the purchase of books. From the trust fund the following religious organizations in Rockport will receive the amounts named: First Congregational Church, ten thousand dollars for a parsonage fund; Methodist, Baptist, Universalist, Episcopal, and Catholic churches, each three hundred dollars. The house and thirty acres of land in Rockport, and forty acres more in Rockport, are to be used for hospital and park purposes. After these provisions are carried out, ten thousand dollars is to be set apart, the income to be used to aid worthy indigent students of Rockport in taking courses in Dartmouth College or the Massachusetts Institute of Technology, the first named to be preferred.

This entry was posted in Uncategorized and tagged Leander M. Haskins Hospital. Bookmark the permalink.