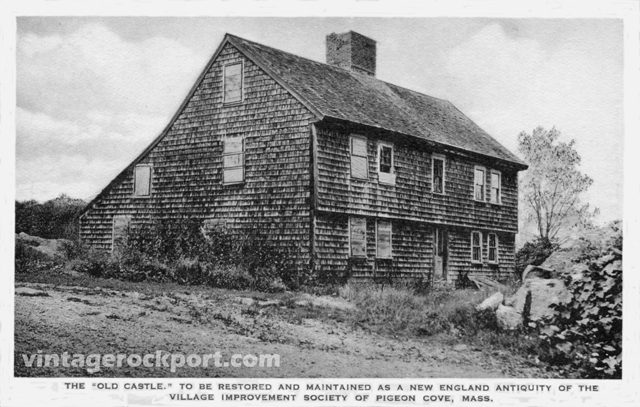 Believed to have been built in 1712, the house they call the Old Castle still stands on Castle Lane, at the intersection of Curtis and Granite streets. The house went through several owners over the years, until Henry L. Story bought it around 1890. Story’s wife Abbie was a founder in 1889 of the Pigeon Cove Village Improvement Society. In 1893, Henry Story made extensive repairs to the Old Castle. Forty years later, in recognition of the house’s historical value, Story’s children deeded the house to the Village Improvement Society, in order that the house “be permanently preserved and maintained in the public interest as a New England antiquity and community center, and as a memorial to Abbie F. Story.”

The caption of this postcard mirrors the language of that deed. The postcard is not dated, but given the caption and the poor state of repair of the house as pictured, I would venture a guess that the photograph was taken around the same time as ownership was turned over. Thus, I place it at around 1930.

In 1987, the Village Improvement Society dissolved and turned over ownership of the Old Castle to the Sandy Bay Historical Society. The society continues to manage and maintain it. Its website has a page devoted to the history of the Old Castle.

Nothing on the historical society’s website explains how the house came by its name. The 1873 book, Pigeon Cove and Vicinity, by Henry C. Leonard, suggested that its name may have derived from the “craggy site, once wild and unshorn,” on which it stands.

The photograph was taken by the Rockport Photo Bureau and the postcard was printed by The Albertype Co., Brooklyn, N.Y.