Even though the Life Saving Station and the Straitsmouth Inn were nearby each other on Rockport’s Gap Head, it is rare to see them together in the same postcard. This view looks across Gap Cove from along Marmion Way, and shows Straitsmouth Point before other houses were built there. 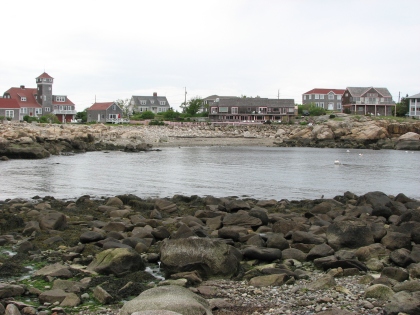 A portion of the same scene today.

The Straitsmouth Inn was built in 1906 and stood until New Year’s Eve in 1958, when a fire burned it to the ground. For a view of the granite fireplace inside the inn, see this postcard.

The Life Saving Station was build in 1889. It was originally called Gap Head Station and then became Straitsmouth Station in 1902. It was active as a life saving station until 1964.

I am not certain when this postcard was published. It was published  by the Frank W. Swallow Post Card Co. Inc., Exeter, N.H. Swallow produced postcards from 1904 to 1927. This card bears a logo on the back that says that Swallow’s company was incorporate in 1911. That means this image could be from anytime in the range of 1912 to 1927.