Moonlight Over Sandy Bay, circa 1910

Seeing the nearly full moon last night over the ocean inspired me to want to post this view of a moonlit Sandy Bay. It was only as I was preparing to publish it that I realized that I had previously published this exact same view, only in a different postcard (see image right). As a matter of 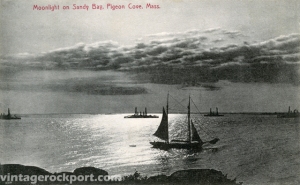