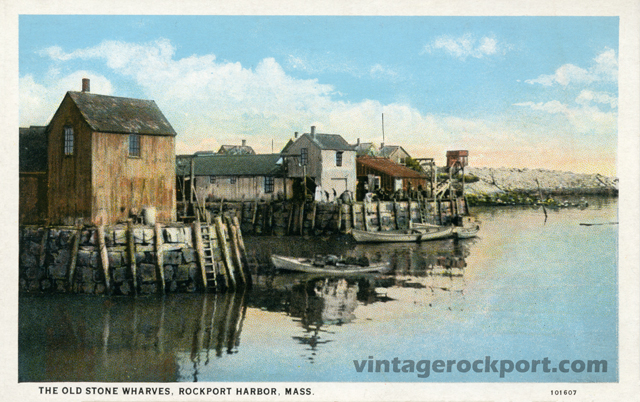 These two postcards show the exact same scene and come from the same publisher, but there are subtle differences between them. In particular, note the clouds — they are vastly different in the two views. The probable reason for this is the process used to color and print the postcards.

The actual photographs used to create these cards were in black and white. The colors were added in the printing process. When and how they were added varied with the printing process. Early B&W film had a particularly difficult time capturing details of the sky and cloud. Thus, postcard printers used retouchers and colorists to draw in the details of the sky. For that reason, you often see the same scene with different sky details.

In this image, you see Rockport’s famous Motif No. 1 to the left. To the far right, near the end of Bearskin Neck, you can see the transit tower, built in 1892, that today is part of a larger building.

Both of these postcards were published by the Edwin C. McIntire Co. of Gloucester. They were printed by the Curt Teich postcard company in Chicago, under the Teich brand C.T. American Art Colored, which was the name of the process Teich created for coloring postcards.

As for the date of these postcards, I am uncertain. The Edwin C. McIntire Co. was in business from 1907 to 1937. At various times, the company went by that name or by E.C. McIntire. I’ve published other McIntire cards, but this is the first to have a white border. White borders were not common on postcards until the 1920s. Another clue is that the Teich company began producing mostly linen postcards around 1930. Linen postcards had a distinct texture that these cards do not. Thus, my best guess is that the cards were from the mid-1920s.

This entry was posted in Uncategorized and tagged Bearskin Neck, E.C. McIntire, Motif No. 1, Rockport Harbor. Bookmark the permalink.

1 Response to The Old Stone Wharves, Rockport, Mass., circa 1925