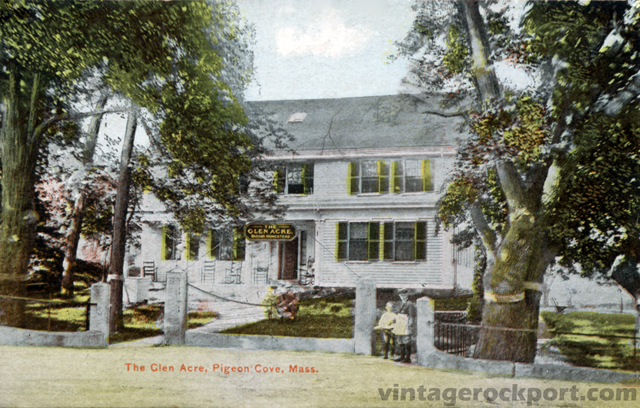 Once a popular Pigeon Cove hotel, The Glen Acre is now a private residence located at 231 Granite Street. It was operated by Mr. and Mrs. John F. Swett and later by Mrs. Swett alone. A 1906 newspaper article describes it as “quiet, restful and in every way desirable.” One reference I found said that the house was originally built in 1802.

An old, undated brochure for The Glen Acre says, “On the grounds is the famous ‘Glen Acre Spring’ a pure, cold and sparkling water, equal in every respect to the Poland Spring Waters of Maine.”

In the view on the top, the sign over the front door says, “The Glen Acre,” then under it says, “The Babson Homestead.” I do not know which Babson this might have been or even whether any Babson ever lived there. Farther down Granite Street, where Halibut Point State Park is now, is the former Babson Farm, which was purchased in 1820 by David Babson from the Norwood family.

The cover of an undated brochure.

Note the differences between the two pictures above. In the lower view, dormers have been added to the house, there is a new sign, and there is now a curbstone running along the road. In the top picture, two children stand by the gate.

The top picture has a postmark of 1921. However, the printing on the reverse side is identical to several other postcards I have that are all from 1910-1914. Thus, I would estimate this picture to be no later than 1915, probably even earlier. The lower card was published by the Rockport Photo Bureau and is postmarked 1925. Most likely, the actual picture was taken at least a year or two earlier.

This entry was posted in Uncategorized and tagged Hotels, Pigeon Cove. Bookmark the permalink.