Update on The Hamlin House in Pigeon Cove

Posted on September 6, 2012 by Robert Ambrogi 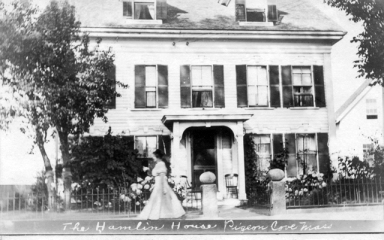 Last February, I posted a real-photo postcard of a house at 163 Granite Street in Pigeon Cove identified as The Hamlin House. Recently, the owner of what are now two condominiums in the house sent me more historical details. Her information identifies the house as The Samuel Wheeler House. Here is the information she gave me:

In 1985, the building was completely renovated into three condominiums, each on a separate floor. In the fall of 2003, the second and third floor condos were remodeled and connected into one pleasant unit with two floors.

I note that one of the children, Lydia, married Jabez Woodbury Kendall. The 1888 History of the Town of Rockport lists a Jabez W. Kendall as among the town’s residents who died fighting the Civil War. He might have been their son or even their grandson. He died in New Orleans on Jan. 16, 1863, at the age of 19. That would place his birth date as 1844, which would have been 27 years after they married. It seems more likely that he was their grandson, and thus the great grandson of Samuel Wheeler.

As I noted in my original post, there was a popular tavern close to this location known as the Wheeler Tavern and started by Capt. Daniel Wheeler. I have to assume he is a descendant or relative of Samuel Wheeler.

This entry was posted in Uncategorized and tagged Pigeon Cove. Bookmark the permalink.

1 Response to Update on The Hamlin House in Pigeon Cove