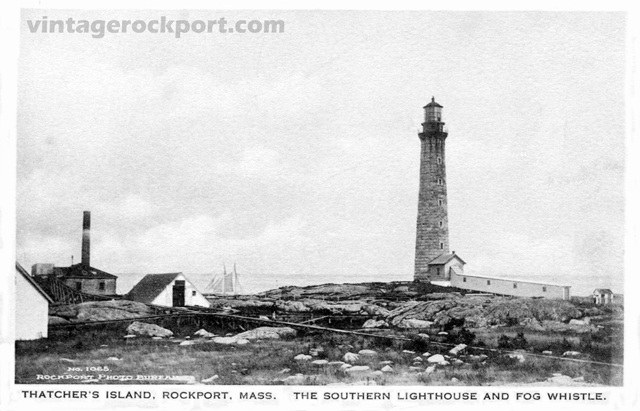 Of the two lighthouses on Thacher Island, one — the southern tower shown here — is owned by the town of Rockport. The other, the northern tower, is owned by the U.S. Fish and Wildlife Service and is maintained as a National Wildlife Refuge.

Note the fishing schooner passing by in the background.

This same picture is included in Paul St. Germain’s book, Twin Lights of Thacher Island, Cape Ann. He notes that the picture shows the fog whistle house (the building with the chimney), which was built in the 1880s and remains there today. The triangular building, he writes, is a covered cistern used to store water for the steam whistle. The trestle that runs to the roof of the whistle house was used by carts that carried coal to power the steam engine.

This postcard was published by the Rockport Photo Bureau and printed by The Albertype Co., Brooklyn, N.Y. I am estimating the date based on the markings on the reverse of the card and their match to other, dated cards from the same publisher.

2 Responses to Southern Lighthouse and Fog Whistle, Thacher Island, circa 1922