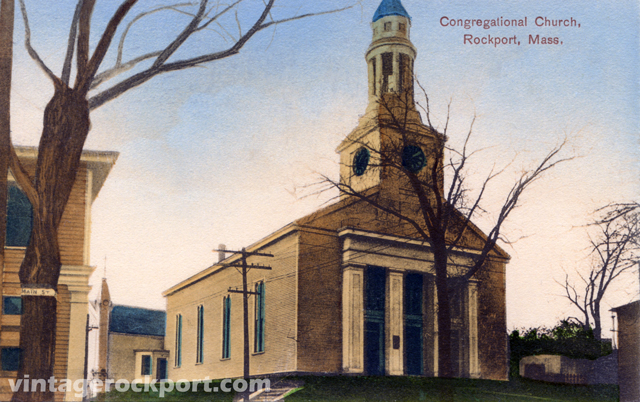 This church, known locally as “The Old Sloop,” has stood at its present location since 1805, although not always as a Congregational church and not as it presently appears. Its location was the site of the first schoolhouse in Sandy Bay, built in 1724. The church was built as a nondenominational meeting house, to replace a nearby smaller one that the town had outgrown. Reportedly, local fisherman dubbed it The Old Sloop sometime in the early 1800s. The Congregational church officially took ownership of the building in 1842, two years after Sandy Bay formally became the town of Rockport.

As originally built, the church had two levels of windows, with a balcony and galleries under the upper level of windows. It had a smaller steeple that today with a bell crafted by Paul Revere. In 1872, two Congregational parishes in Rockport joined as one. To make more room, they cut the church in half, separated the halves by about 20 feet, and then constructed a new middle section to join the two halves. The two levels of windows became the single level of tall windows you see today. At this point, the steeple was enlarged and the clock was added.

A well-known story about the church is that it was on the receiving end of a British cannonball in 1814. The church’s website relates the story:

September 8, 1814, the British frigate Nymph invaded Sandy Bay. One of her barges surprised and captured the barracks at the end of Bearskin Neck; when the second was seen entering the Old Harbor, the meeting house bell sounded the alarm. The crew shot at the bell to silence it and hit the steeple instead. Firing the shot, the carronade went through the bottom of the barge, and the crew were captured as they swam ashore. Their captain effected an exchange of prisoners and promised not to bother the town any more. The church still has the cannonball. The wooden replica in the steeple was probably added in one of the later reconstructions.

The brief history above is derived from the more-detailed history published on the church’s website.