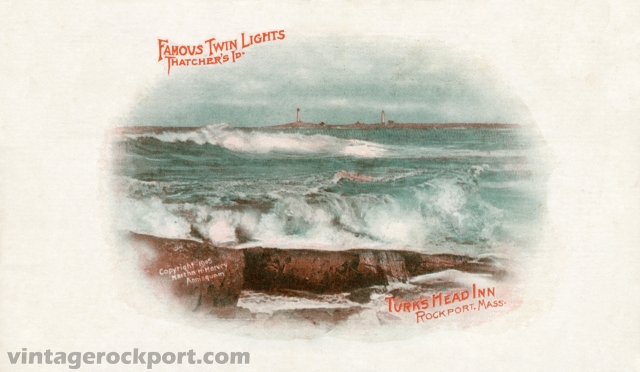 This beautiful image of the Twin Lights on Thachers Island bears the inscription, “Copyright 1905, Martha H. Harvey, Annisquam.” I have another of Harvey’s images in a postcard from 1897 showing the Annisquam River. Note that the postcard also references the Turk’s Head Inn, so perhaps it was produced for the inn.

Harvey, who lived from 1862 to 1949, was an artist and naturalistic photographer. She and her husband, the artist George Wainwright Harvey, lived on River Road in Annisquam and had side-by-side studios there.

Harvey made her living primarily as a photographer, using an 8-x-10-inch camera to produce hundreds of large-format photographs of Gloucester and Cape Ann.

The majority of Harvey’s glass-plate negatives were acquired by Yankee magazine. In 1994, the magazine donated them to the organization Historic New England as part of a collection of more than 2,000 negatives showing New England from the 1890s to the 1930s.

In a reader’s comment to my prior post about Harvey, Chris Shattuck tells a story from the 1960s about how his Annisquam neighbor, Elliot C. Rogers, had come into possession of Harvey’s negatives and of how he convinced Yankee magazine to purchase them.

George Wainwright Harvey, who lived from 1855 to 1930, is described on Cape Ann Museum’s website as one of Cape Ann’s most skilled native artists. According to an 1883 newspaper article about an exhibition of his watercolors, he was “a young Gloucester fisherman whose only instruction in art was gained by watching the artists whom he took out in his boat.” In 1886, George and Martha traveled to Holland so that he could study painting.

This entry was posted in Uncategorized and tagged Thacher Island, Twin Lights. Bookmark the permalink.