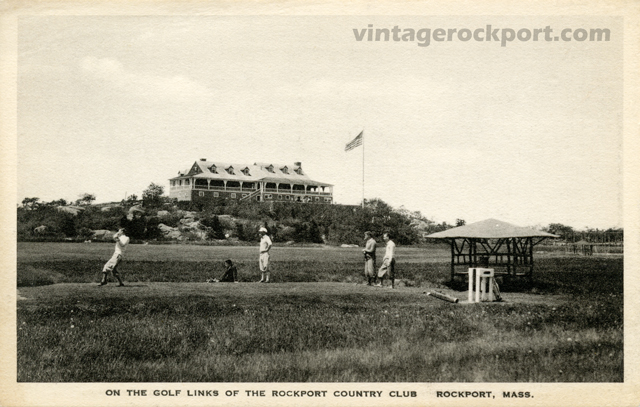 Someone has just teed off in this 1920s-era view of a foursome at the Rockport Country Club. Note the old-style golf slacks that end just below the knee. Also note the young man sitting by the tee. Could he be a caddy or just the son of a golfer?

The Rockport Country Club formally opened to the public on July 3, 1915. The idea for it hatched in 1911, when townspeople hoped a golf course would attract more summer visitors. The original plan included not only the golf course, but also tennis courts and a baseball field.

During the Great Depression of the 1930s, the club fell on hard times. From a membership of 225 in 1929, the number fell to 40 by 1935. That year, the club was sold for $1,500 to a group that reformed it into the Rockport Golf Club. Soon, its membership was growing once again.

This postcard was published by the Rockport Photo Bureau. It is postally unused and undated. Based on the similarity of the reverse side to other postcards, I estimate its date to be around 1928.