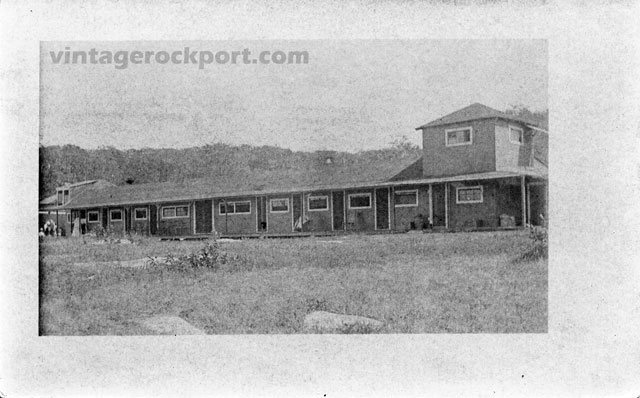 [Note added 1/1/13: Turns out this was not at Andrews Point but was the summer camp of artist John I. Coggeshall in Lanesville. See my updated post here.]

The description that accompanied this postcard when I purchased it said that this was an artists’ camp on Andrews Point in Rockport. The card itself bears no title that identifies the location. The card was postmarked from Springfield, Mass., on Oct. 4, 1909. The sender describes the scene as “the camp on the Cape Ann shore where we spent our vacation.” 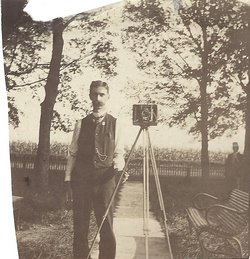 The card was mailed by someone identified only as “Geo.” and was addressed to George A. Swallow in Brownsville, Vt. The website Find A Grave has a listing for a George A. Swallow of Brownsville. It includes the photo you see to the right, which is of Mr. Swallow. The note on the card refers to “mother,” leading me to wonder whether the two Georges were related.

As it turns out, Mr. Swallow was quite the amateur photographer. His primary occupation was running a general store and serving as postmaster in Brownsville. But he took many glass-plate negatives. Last year, the unattributed negatives were donated to the Vermont Historical Society. It took some sleuthing on the society’s part to track them back to Swallow. Now, they’ve posted his photographs to Flickr.

As I said, Mr. Swallow was the recipient of this card, not the sender. Thus, although he was an avid photographer, I have to assume he was not the photographer here.

This was a real-photo postcard, printed from an actual photo negative. The photo was badly faded and in poor condition. I attempted to restore it to a viewable level, but it is still in rough shape.

If anyone knows anything about this camp, I would love to hear from you.