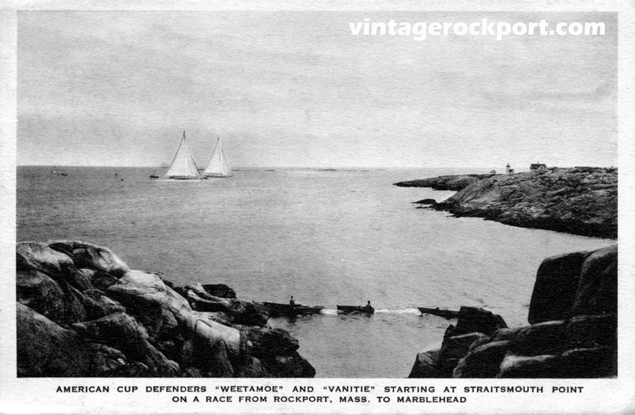 In 1930, for the first time in America’s Cup competition, a universal rule was adopted for the design of eligible yachts, the J class. These J Class yachts had a waterline length of between 75 to 87 feet. Only 10 of these J class yachts were ever built.

In 1930, spurred by a challenge from Sir Thomas Lipton in England, racing the British yacht Shamrock V, Americans designed four J-class yachts as defenders: Enterprise, Whirlwind, Yankee and Weetamoe. Also, the Vanitie, which was built in 1914 for America’s Cup competition, was converted to J class, primarily for use as a trial horse to race other yachts.

Although some believed that Weetamoe was the fastest of the four, Enterprise was chosen to defend against Shamrock off Newport in 1930, ultimately winning the cup.

As the defending yachts prepared for the 1934 America’s Cup, Weetamoe competed against Vanitie in a series of races along the New England coast. On July 9, 1932, the last leg of the series ran from Rockport to Marblehead. Weetamoe beat Vanitie by 14 minutes to break a tie and capture the series win.

Weetamoe was designed by Clinton Crane and built  by Herreshoff Mfg. Co. It was financed by a syndicate that included magnates such as J.P. Morgan and Cornelius Vanderbilt, then was sold in 1930 to Fredrick Henry Prince, an investment banker who owned estates in Newport, R.I., and Wenham, Mass. Weetamoe was scrapped in 1937.

Vanitie was designed by William Gardner in 1914 and was a 1920 America’s Cup defender candidate. Gerard B. Lambert, part of the syndicate that financed Weetamoe, bought Vanitie in 1928 to convert her to J class and use her as a trial horse against the four new J class yachts. Vanitie was scrapped in 1938.

This postcard was published by Rockport Photo Bureau. It bears a 1933 postmark.

This entry was posted in Uncategorized and tagged Rockport Photo Bureau, Straitsmouth. Bookmark the permalink.