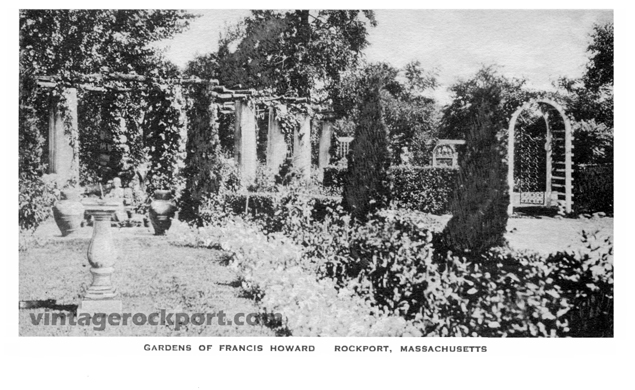 Francis G. Howard was a nationally prominent landscape architect widely known for his designs of gardens and garden furniture and ornaments. Born in Maine in 1869, he lived in New York City and summered in Rockport, where he had a studio. He died in 1937. I do not know where his home was here and would appreciate hearing from anyone who does know. I assume the gardens shown here were at his home, but I do not know that.

Howard was popular as a landscape designer in New York social circles. Several news articles from the 1930s describe his work designing both permanent gardens and landscaping for special social events. Earlier in his career, he toured Spain and became an expert in Spanish gardens. In 1922, he delivered an address to the American Institute of Architects on the subject of Spanish gardens. The address was published in the April 12, 1922, issue of The American Architect. An even-earlier article, from 1919, describes Howard’s use of granite and wrought iron he collected from Italy to design wells for a garden in Connecticut.

'Young Diana' at the MFA.

Locally, Howard was known for designing the garden for the Hammond Castle in Gloucester, built by inventor John Hays Hammond Jr. as his home and to house his art collection. The garden, which featured a panoramic view of Gloucester harbor, was filled with many statues, but the focal point was said to be a statue called Young Diana.

Legend has it that the model for the statue was the actress Bette Davis, who is said to have posed nude for it in 1924, when she was 18 years old. The sculptor was Anna Hyatt Huntington, a prominent sculptor who also created the Joan of Arc statue in Gloucester. The Young Diana sculpture remained at the Castle until the 1970s, when it was donated to the Museum of Fine Arts in Boston. The museum lost track of it for several years until it was discovered tucked away in a storeroom. It is currently on display there.

A collection of Howard’s papers are held by the New York Public Library. The collection includes a letter from Howard’s father sent from the battlefield at Gettysburg after the Rebel retreat. There is also a reference on the Sandy Bay Historical Society website to a Francis Howard, architect, with regard to a record titled “General Plan of Old Commons and Baptist Church Land.”

This postcard was published by Rockport Photo Bureau. It has no date. Based on the similarity of the backside to other cards, it appears to be from sometime around 1928.

This entry was posted in Uncategorized and tagged Rockport Photo Bureau. Bookmark the permalink.