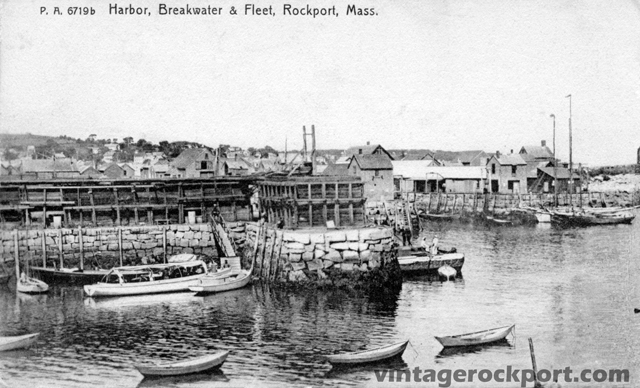 Here is a circa 1906 view of T-Wharf and Motif No. 1 beyond it. The wooden structure on T-Wharf is the coal pocket where coal was stored. It was later replaced by a cold storage building.

T-Wharf was built in 1869 and was long known as Central Wharf. It seems the name changed gradually, not all at once. I found an 1885 Rockport business directory that listed a business located on “T Wharf.” But I’ve also seen maps from that same year that showed it as Central Wharf.

In this picture, on the dock at the end of T-Wharf, there appear to be two sailors in white uniforms, possibly waiting for a shuttle to take them back to the warships that regularly anchored off Rockport in late summer.

This postcard was published by The Rotograph Co., New York City, and printed in Germany. It bears a 1907 postmark but has an undivided back, which suggests it was printed prior to 1907, the year postal laws changed to allow divided backs.

This entry was posted in Uncategorized and tagged Motif No. 1, Rockport Harbor, T-Wharf, Warships. Bookmark the permalink.