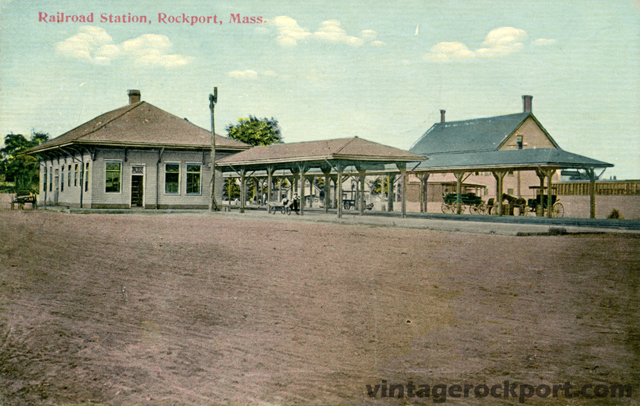 Compare this view of the Rockport railroad station with this other one from the same time period. They focus on pretty much the same view, but from opposite sides of the depot house. I assume the dirt-covered lot in front of the depot is where the parking lot is today.

Neither the card above nor the earlier one I posted show a date of publication. This one also does not identify a publisher. Based on the printing and markings on the reverse, it matches several other cards I have, all from the 1910-1912 era. Thus, I estimate its date to be 1911.

Interestingly, the card was postally used and does have a postmark. Even though I estimate the card to be from 1911, the postmark is dated March 5, 1942, from Boston. The note on the back acknowledges that, even in 1942, the card was old. “This is a very old card as you will see by its old fashion carriages and the horses,” says the writer, who signed her name as Aunt Faith. “But I think the station is just the same.”

See my earlier post for the story of how the enterprise of the people of Rockport first brought the rail line to the town.

This entry was posted in Uncategorized and tagged Train. Bookmark the permalink.