Posted on February 3, 2011 by Robert Ambrogi 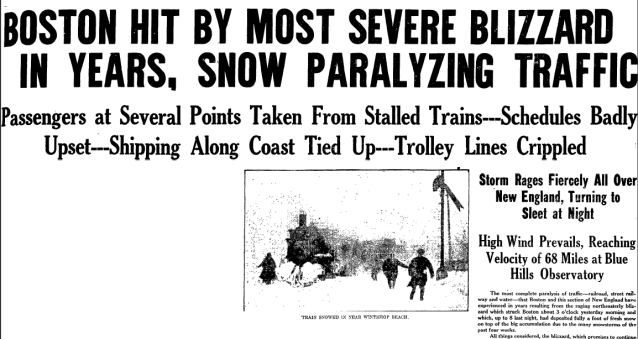 Off topic a bit, but while doing some research I came across this timely article from the Feb. 6, 1920, Boston Daily Globe: Boston Hit By Most Severe Blizzard in Years, Snow Paralyzing Traffic. In a parallel we can well sympathize with these 91 years later, it wasn’t the quantity of the latest snowfall that was crippling, but the addition of yet more snow to a four-week stretch of repeated storms. As the Globe explained:

The most complete paralysis of traffic — railroad, street railway and water — that Boston and this section of New England have experienced in years resulting from the raging northeasterly blizzard which struck Boston about 3 o’clock yesterday morning and which, up to 8 last night, had deposited fully a foot of fresh snow on top of the big accumulation due to the many snowstorms of the past four weeks.

Regular riders of the Rockport commuter rail might appreciate this passage:

The first night train from Beverly arrived at 8 pulled by two locomotives. The train left Rockport at noon and the cars were nearly derailed when a mountain of snow was encountered near the Magnolia station. Trainmen reported that two Rockport-bound trains, between which a snowplow was sandwiched, were stalled in huge drifts at Magnolia.

A reminder that, when it comes to winter weather, what goes around comes around.

This entry was posted in Uncategorized and tagged Winter. Bookmark the permalink.