Winter Scene Near the ‘Old Castle,’ Pigeon Cove, circa 1930 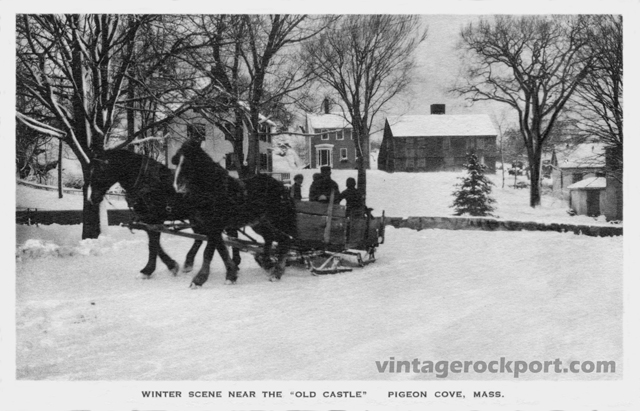 With a nod to this week’s snow and cold, here is a snowy scene from the past. It shows people riding a horse-drawn sled near The Old Castle, near the intersection of Curtis Street and Granite Street. The Old Castle, the saltbox house in the background, is now maintained by the Sandy Bay Historical Society, which estimates its date of construction as 1712.

As for the date of this postcard, I am estimating it was around 1930. The card was published by the Rockport Photo Bureau, which was established in 1907 by Charles Cleaves. Cleaves died in 1937. The Rockport Photo Bureau continued to operate until 1945 under the management of Cleaves’ daughter, Virginia Cleaves Little. Even so, Little imprinted the cards she produced with her name, not that of the Photo Bureau. So that suggests this card was published before Cleaves’ death.

Another clue is the card’s backing. Cards produced by the same publisher often changed in the design of their backsides over the years. The back of this postcard is consistent with others I have from this publisher that are postmarked in the early 1930s.

3 Responses to Winter Scene Near the ‘Old Castle,’ Pigeon Cove, circa 1930