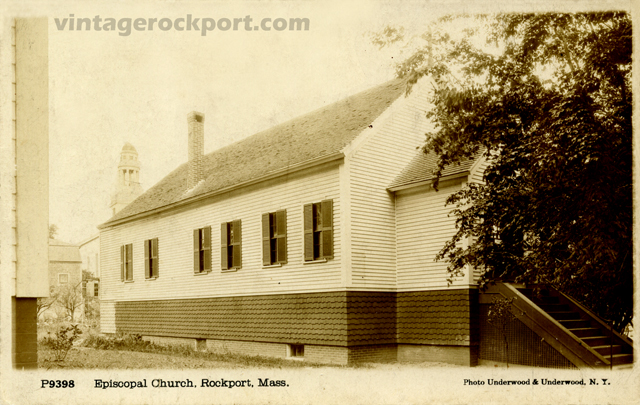 Although it looks nothing like the present-day St. Mary’s Episcopal Church on Broadway in Rockport, I believe this is the original structure, before the church was expanded out and up. In addition to the fact that the postcard identifies it as the Episcopal Church, there is a clue in the background — the steeple of the Congregational Church in the very location where you can still see it behind the Episcopal Church. 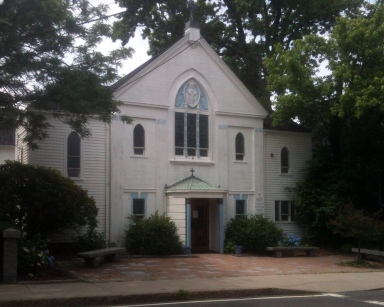 Episcopalians first began holding services in Rockport in 1872, meeting in the Y.M.C.A. on Broadway (more recently known as the Odd Fellows Hall). Because these services were conducted by the rector of St. John’s Episcopal Church in Gloucester, they discontinued once winter arrived. They did not start again until July 1878, only to again be discontinued in October 1878 until they resumed in 1885, with meetings in various halls around town.

On May 7, 1886, the town’s 19 Episcopalians formed a formal organization by the name of St. Mary’s Mission. A room in town hall served as their chapel until, on Aug. 6, 1892, St. Mary’s church on Broadway was opened for its first service. 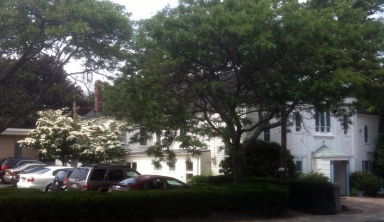 The steeple of the Congregational Church can be seen through the trees, approximately where it appears in the postcard view.

This real-photo postcard was published by Underwood & Underwood of New York City. The company was founded in 1881 by two brothers, Elmer and Burt Underwood, to sell stereoscopic images. In 1891, the brothers started making their own stereoscopic photographs. By the turn of the century, the company became the largest producer of stereoviews in the world.

In 1910, the company began sending photographers all over the world and supplying news photos to newspapers and postcard publishers. From around 1914 to 1919, the company also began publishing its own postcards. As you can see from the image above, all the postcards were numbered. From what I can gather, the number on this card would place its date as approximately 1915.